Marriage is the first institution created by God. Right after creating Adam and Eve and bringing Eve to Adam to be his partner, He told them that a man should leave his father and mother and join his wife in marriage so that the two of them would become as one. That relationship would be solidified with the addition of children. Yet too often the marriage relationship limps along with husband and wife failing to listen to the other one. Yes, each must work on communication skills, but the skill most lacking is the one of listening, taking in, understanding. Sometimes, it takes patience to spend a moment. Jesus modeled patient, listening behavior for us.

“So God created humans in his image. … He created them male and female.” (Genesis 1:27 GW)

Comments welcomed. Let’s share what God says to His saints. Please join us for Prayer and Questions at the end of the devotion. Why not forward this blog post to a relative, friend, or neighbor who might be blessed by it?

We’re going to drop in on the Johnsons, a young married couple with two children, a heavy mortgage, and very busy lives.

“Dave, can you help me with something?” Sally shouts from upstairs, exasperation in her

“I can’t now, honey,” he replies. “I’ve got to finish this project before noon, or my boss will kill me.”

A few days later, Dave is on the phone with a computer technician who says his network, which he thought was secure, has become corrupted by someone who has turned off his firewall, leaving him without protection.

To fix this emergency, he is told, will cost several hundred dollars.

“Sally,” he calls out from his home office. “Got a sec? We’ve got a problem with our network, and I think we’ll need to invest in getting it fixed. Can you come here?”

“Not now, Dave. I told you I have to prepare cookies for Jamie’s scout group and then we’re meeting Diane and her kids for lunch. Can we talk about it later?”

WELL, THAT WAS ALL TOO COMMON. A busy couple, each caught up in doing his or her

As a result, neither spouse gives his or her mate the support needed in the moment.

Over the years, this pattern becomes engrained so that no one talks about it or notices their own complicity. Yes, each one can recite examples of how the other was seemingly “too busy” to help out, but, when it comes to their own involvement, they can justify every time they failed to help out.

It usually starts with a failure to listen.

So, how does God see this interaction? Is this what He intended when He breathed life into the first man and woman and planted them in the Garden, telling them to have dominion over the earth and its animal and plant  kingdom, to have children together and raise them, and to be so close as an entity that they would become “one person,” instead of two?

GOD CREATED HUMAN BEINGS in the beginning. He made us in His image, and He divided us into male and female, each equal in His eyes but with different traits and characteristics. 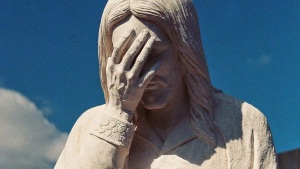 He also created marriage and said that men and women should leave their parents and “cleave” to one another as one entity.

The spousal relationship of husband and wife is a unique human institution that closely mimics the Trinity of God as Father, Son, and Holy Spirit: each person equal but with different characteristics.

By becoming one person, both the man and the woman as husband and wife were charged with listening to one another, to helping one another, and to complementing each other’s weaknesses with their own strengths.

They were not created to make demands on one another to satisfy their personal needs but to make pleasing the other their primary goal.

Scripture is clear on that in so many places, including this familiar passage directed specifically to marriage: “Wives, submit to your own husbands, as to the Lord. … Husbands, love your wives, as Christ loved the church.” (Ephesians 5:22, 25 ESV).

A PASTOR RECENTLY SAID that he can tell whether a woman’s husband is leading her spiritually the way God intended just by looking at her face.

Is she happy? Does she radiate joy? Does she seem fulfilled? Or, instead, does she scowl a lot or look apprehensive or dejected?

In God’s calculus, a woman whose husband is obedient to the Lord by leading her spiritually, by being her head, will be a woman who feels safe and protected and, therefore, free to express herself, to open up her loving and vulnerable heart.

A woman whose husband is not obedient to the Lord, who uses his greater strength and loud voice to intimidate her and frighten her, will be more guarded, less sure of herself, and less willing to express her inner feminine side.

A key component of leading a woman the way God intended is for the man to understand and practice sacrificial love, the way Jesus sacrificed Himself to protect and nurture His great love, the church.

THE IMAGE OF JESUS wrapping a towel around His waist to wash His disciples’ feet (John 13) is a very striking one. He told His disciples that no student is above His teacher (Matt. 10:24), so He expected us to carry on as He did.

He was the perfect model of male headship; He modeled leadership … and sacrificial service; courageous boldness … and gentle caring. He worked hard, never complained, loved the people around Him, and stayed true to His mission.

himself up for her” (Ephesians 5:25 NIV), he is describing a sacrificial love that places the wife’s interests before his own.

That is why Paul can tell wives to “submit to your husbands as to the Lord” (Ephesians 5:22 NIV). Once the husband is modeling Jesus’ behavior, any woman would submit to him as “to the Lord,” because the husband is acting biblically … and this allows the wife to respond biblically.

SO, HOW DOES THIS relate to listening?

The basic intersect point between husband and wife is conversation.

When one party or the other fails to listen to his/her mate, that intersect point becomes disconnected. The disconnect separates them from “being one,” as God planned, into separate individuals, each with separate needs, wants, interests, and goals.

That’s not how Christ interacts with His church, and it most certainly is not how the Christ, Holy Spirit, and Father interact in their perfect relationship in the Trinity.

Not much, perhaps, but it’s a start.

PRAYER: Our Heavenly Father, so merciful and mighty, please forgive us for our prideful

failure to listen to our spouses, to give our wives the love and honor you’ve commanded us to, to give our husbands the respect and submission that are your plan. You have set the perfect example for marriage in the life of our Lord and Savior, who taught us of His love for His church, and the love that abounds within the Holy Trinity. Lord, help us to follow that model in our marriages, to Your glory. In Jesus’ name, Amen.

1. Do you see a failure in your marriage (or other significant relationship) for each person to listen to the other one? If so, do you see that as a problem that should be resolved, or is it just in the nature of things to be endured?

2. How can you do a better job of listening to your husband/wife? Would you need to become more patient? Is that a trade-off you’re willing to make? Should your spouse become less demanding?

3. Regardless of how well you and your spouse communicate, do you see a role for Jesus Christ in your marriage? If you saw Jesus standing behind your spouse, reminding you that he/she is a “child of God,” would that alter your attitude and behavior?

6 thoughts on “Marriage: Are We ‘Too Busy’ For Our Spouses?”

May you find what your soul needs.

Some coffee, a keyboard and my soul! My first true friends!

A word of truth in a world that acknowledges little of it.

Mary has chosen what is better, and it will not be taken away from her -Jesus

Dining with Jesus Christian Episodes. Hablamos Español. May the Lord bless those who have visited our site and faithfully followed us as we continue our mission to spread the gospel to all corners of the world. Amen

Theology of a Newfoundland Housewife

Exploring Who God is

Traveling the World Through Others

Blessed with a Star on the Forehead

As I navigate through this life ...

Motivation, Inspiration, Make time to motivate and inspire others