God’s Word is Truth. His Spirit guided the individual writers of the biblical canon. Jesus Christ is the centerpiece. The Old Testament points to His arrival; the New Testament records His visit and immediate aftermath, including His life and teaching and His death, resurrection, and ascendancy. It trumpets the Holy Spirit, which guides our hearts and reminds us of Jesus’ teaching. God, in all Three Persons, warns mankind against adding to His Word or subtracting from it. The canon is set. It is His Truth, which is the only Truth. His Word is not to be reinterpreted according to our likes and dislikes.

For there is going to come a time when people won’t listen to the truth but will go around looking for teachers who will tell them just what they want to hear. They won’t listen to what the Bible says but will blithely follow their own misguided ideas. (2 Timothy 4:3-4 TLB)

Woe to those who call evil good, and good evil; Who substitute darkness for light and light for darkness; Who substitute bitter for sweet and sweet for bitter! (Isaiah 5:20 NASB)

And since they did not see fit to acknowledge God, God gave them up to a debased mind to do what ought not to be done. (Romans 1:28 ESV)

TOO MANY PEOPLE WANT TO WRITE THEIR OWN BIBLES.

That is disturbing enough when non-Christians want to rewrite the Holy Scriptures, eager to make its pages reflect their own worldview; worse when those who call themselves followers of Christ rewrite God’s Word.

Rewriting God’s Holy Word is the favored tactic of those who claim to honor the totality of Scripture, as they see it, while dishonoring specific commandments and directives that cut across their “lifestyle.” In other words, they are willing to hold God to His promises of salvation and mercy but insist that His guidebook to us needs updating “to fit the times.”

Let’s not lose sight of original sin and man’s plight in this world. The very first sin  recorded in the Bible was of Eve, and then Adam, eating the fruit “from the tree of the knowledge of good and evil” (Genesis 2:17; 3:6-7 NIV).

The reason for eating of the forbidden fruit? According to the serpent, the form taken by Satan to tempt the first man and woman, “you will be like God, knowing good and evil” (Genesis 3:5 ESV).

That’s the crux of the matter.

WE ALL WANT TO BE LIKE GOD, but only God can be God. The position is filled. It belongs to the author of all creation (“In the beginning, God created the heavens and the earth” (Genesis 1:1 NIV), not to the created beings, even those created  beings—man and woman—whom God created in His likeness (Genesis 1:27 NIV).

Nor is God willing to share the glory of being God — “I am the LORD, that is My name;

I will not give My glory to another,” (Isaiah 42:8 NASB) — even though He commanded our forebears to take responsibility for tending to creation (Genesis 1:28 NIV).

Wanting to be like God is “pride,” which is a sin. It is the sin that cost Lucifer, or Satan, “the devil,” his position in heaven. “This great dragon—the ancient serpent called the devil, or Satan, the one deceiving the whole world—was thrown down to the earth with all his angels” (Revelation 12:9 NLT).

Jesus, of course, was present when God cleaned house. “So [Jesus] said to them, ‘I saw Satan fall like lightning from heaven’” (Luke 10:18 BSB).

God takes seriously His position as creator and manager of all creation: “My Father is always working, and so am I,” Jesus said (John 5:17 NLT). His preeminence over all is without question: “The earth is the LORD’s, and everything in it. The world and all its people belong to him” (Psalm 24:1 NLT).

IN FACT, THE BIBLE CLEARLY WARNS US not to mess with God’s Word to us.

Early in the Bible, He warns us not to add or subtract from God’s commands to His people (“Do not add to what I command you and do not subtract from it, but keep the commands of the Lord your God that I give you” (Deuteronomy 4:2 NIV).

The Bible is a unified body of God’s Word to us, written by the inspiration and guidance of the Holy Spirit through the hands of some 44 writers over a period spanning 1,500 years, with no contradictions or inconsistencies, when properly understood.

The apostle Paul tells us that “All Scripture is inspired by God and is profitable for teaching, for rebuking, for correcting, for training in righteousness” (2 Timothy 3:16 HCSB), and the apostle Peter tells us (2 Peter 1:21 NIV): “For prophecy never had its origin in the will of man, but men spoke from God as they were carried along by the Holy Spirit.”

SO, WHAT’S GOING ON?

With so much in the Bible telling us that God’s Word is His Word and He’s fine with it as it is, and, moreover, God tells us He Is The Word (“In the beginning was the Word, and the Word was with God, and the Word was God” – John 1:1 NIV), then why or how do some folks who claim to know the Lord also say they do not take His Word literally?

How do they reach the point of departure from God-inspired Scripture to say they “interpret” God’s Word according to their own  experiences and reason? How do they arrogate to themselves the right to reinterpret clear passages of Holy Writ to accord with their personal tastes, as though the Bible were a smorgasbord, where one can 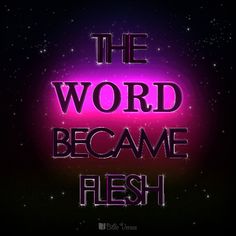 pick and choose whatever suits, as long as one eats everything on one’s plate?

How does that happen … unless they stop worshipping the God of the Bible and substitute for Him a god of their own creation, someone more to their liking. This is the reverse of Genesis 1:27, where, instead of believing that God created man in His image, man now creates “god” in man’s image.

Yes, the apostle John had it right when he wrote of Jesus coming into the world (John 1:10 NET), “He was in the world, and the world was created by him, but the world did not recognize him.”

PRAYER: Dear Heavenly Father, our Creator and our Lord, we confess that too often we rewrite Your inspired Word in our hearts or pick and choose which parts we want to honor and which ones we’d like to forget, when You have warned us against adding or subtracting from Your Word. Forgive our pride and our disobedience, and give us new hearts, hearts that seek after You, hearts that love You, hearts that praise You. Thank You, Lord, for Your Word. In Jesus’ Name we pray. Amen